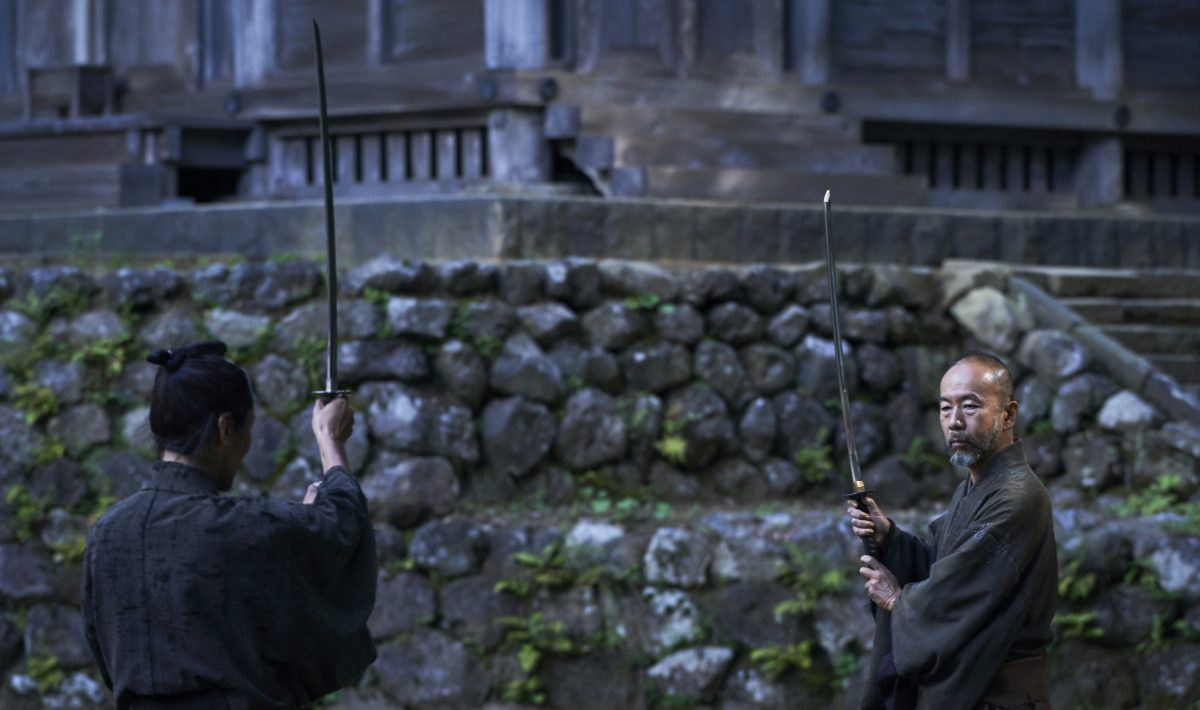 Independent artist Shinya Tsukamoto, who accustomed the viewer to bold transformations of genre cinema, this time takes samurai film to the workshop. This choice is not accidental and not without significant critical load for Japanese culture and samurai code of honor.

Killing is a film created with little budget, but despite modesty, it maintains high diligence and accuracy – the duels are realistic (apparently the director spent several months practicing sword fighting to perform as well as a martial arts master), and in the work of the camera you can feel the modernistic significance of meanings.

By deconstructing the classic genre, Tsukamoto settles with traditional side of Japanese national identity. The very title of the film suggests that the act of killing will not only be an aesthetic, bloody and essentially empty background, but something momentous that leaves consequences behind. The director follows the path already trodden by anti-westerns (e.g. Clint Eastwood’s Unforgiven, in which a similar collision of the hero-cowboy icon with the murderous past occurs and is giving the genre a new value), but still fresh and original for far-eastern samurai genre.

The film’s main character, young ronin Mokunoshin, seems to be a picture of restrained wisdom and nobility. He spends his time living in the countryside and helping the farmers. He teaches the young peasant to fight with a sword and flirts with his sister. In this figure humility and Japanese honor code will come together. Mokunoshin is an immature hero – it is not his fault, it is rather a matter of youth, inexperience, uncertainty (crisis of samurai culture) – which means that he is not able to bear the burden of responsibility imposed by culture. On the other side is a senior samurai played by the director, a picture of strength and confidence. Without thinking, he can decide to knock out a gang of bandits (perhaps also wandering ronins deprived of their master) and effortlessly complete the task. Tsukamoto will collide both heroes to show the failure of two attitudes towards the requirements of the Code, which either cannot be met, or turn nobility into criminals.

Watching the Killing, the viewer will also be reminded of Kurosawa cinema, and especially the humiliating attitude of the Japanese master’s heroes to women. Tsukamoto also does not leave this without a comment, playing with the typical for Kurosawa image of a woman-temptress who is the source of intrigue and the engine of negative action. Peasant played by Yû Aoi will gain self-awareness and her own subjectivity with an outburst of pain, creating the third, perhaps the most interesting, point of view for spectators.

Killing it’s not just genre game. This is a clever political comment. The deliberate reference to the Edo Period (lasting from the seventeenth to the nineteenth century) of Japanese history, i.e. until the moment of separation from the outside world, is a warning against a historical repetition (the first alarm bell was last year’s crushing victory of the right in the Japanese parliamentary elections). Although Tsukamoto’s work is not a large production, it definitely deserves recognition, presenting a colorful, accurate and effective image of both bygone and modern Japan.