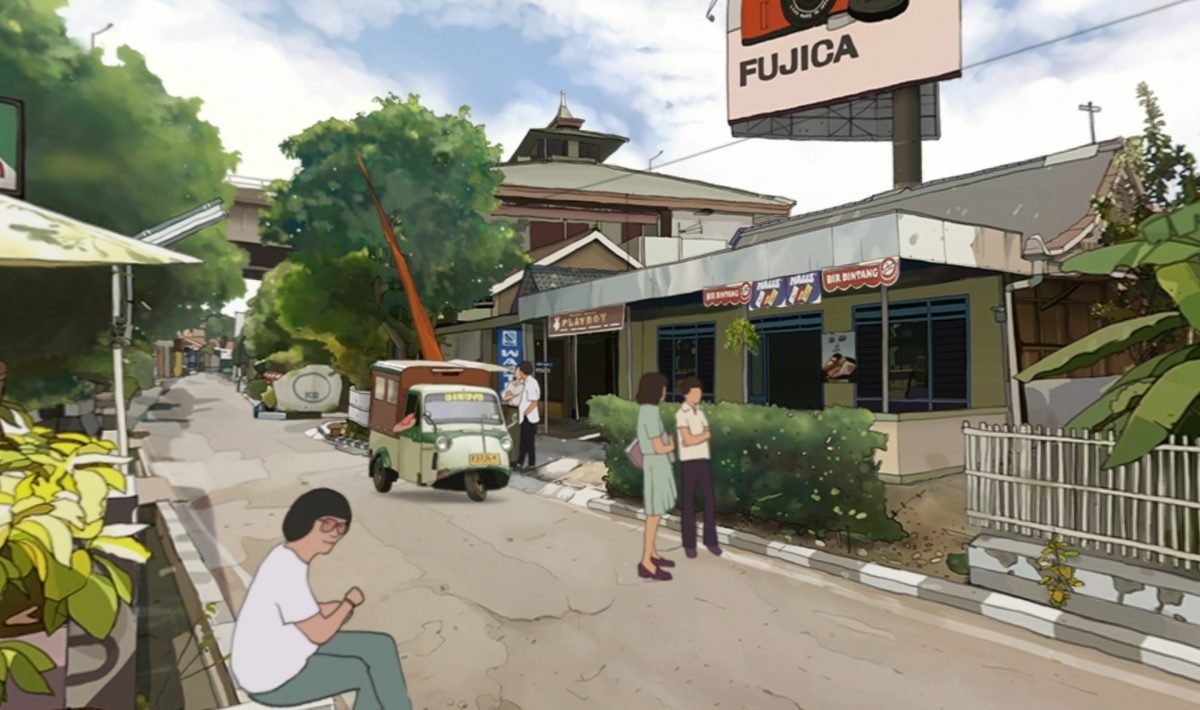 Although VR technology has a much longer experience in visual art and various artistic installations than in film, in the last 10 years (in 2010, Oculus Rift glasses were introduced on the market), there has been a huge evolution of the medium. Technological advances have not only democratized the virtual reality experience[1], but also expanded the space for filmmakers’ experiments.

There is no doubt that VR has opened new avenues for apologists for immersive interactivity in the cinema[2]. The film diegesis opens up to viewers, allowing them not only to participate in the hero’s perspective, but also to share it with him, and more importantly, to create their own perspective by deciding what they will look at.

But if one treats VR in cinema only as a tool of interaction, this medium does not have many arguments to defend itself – after all, if one wants to experience an immersive experience, one can sit down to a computer game (or better, put on glasses and play something dedicated to VR). On the other hand, the classic film narrative by means of creator’s safe guidance – projection-identification can create a similar immersive impression –offers the viewer a specific perspective, gives him much more space for reflection and the presence of emotions (emotions more noble than gaudy shock, amazement or surprise).

A lot of water had to run under this bridge before it was time for creators to finally began to understand that VR is first and foremost a tool that does not have to be immersive, but can be used creatively, and even deconstruct the immersiveness –  deconstruct the reality and be self-deconstructed as a medium. Where should one look for examples of new virtual reality strategies? The answer is simple – in the Far East.

The act of peeping – the panoptic VR

Bloodless, a work of Korean visual artist awarded in 2017 in Venice, Gina Kim, can be classified as a narrow category of films that tell a story not only from the level of narration, but also through mechanics.

The director tells the terrifying story of sex workers who have lived in military towns in South Korea since the 1950s and served the American soldiers stationed there. We observe the last moments of the life of a woman who was murdered by an American soldier in 1992 in Dongducheon Camptown.

With the help of VR, on the one hand, Kim refers to the ubiquitous view of the streets of such publicly available tools as Google Maps or Google Earth, and on the other, to panoptic control and observation of a part of Korean society devoid of legal protection, functioning in city-camps (a kind of no-man’s land, where the law does not apply) only to sexually serve the soldiers of a foreign country – though on paper they are not invaders, in reality they are becoming monsters.

The Korean artist condemns the viewers to a gloomy observation – although viewers can move their VR gaze, they only watch a lonely woman and wait for what will happen next. There is something perverse about the gaze offered by the artist – something cruel and, at the same time, fascinating in being able to look away, in being able to follow a woman walking to her death through dark alleys. What is the viewer’s intention? Kim masterfully deconstructs the passivity of Korean society, which knows about the tens of years of shameful practice and exploitation of women, and at the same time looks idly through half-blinded eyes. With the help of extremely simple means, Kim reveals not only society’s ignorance of human rights violations, but also the process of marginalizing over a million women who at various times worked in the city-camps as sex workers.

VR – the time and space machine

The French-Indonesian creator, Jonathan Hagard, made a unique animation in the VR environment. Replacements is a journey through the civilization and social changes that have affected the Indonesian capital, Jakarta, over the past 40 years. Hagard places the viewers’ gaze in the middle of a charming street full of life – a boy flies a kite, someone is riding a bicycle, street food is sold at small stands. The life of a large family in a tidy, modest house is flourishing. In less than 12 minutes of the film, this charming street will change beyond recognition.

Replacements is a very personal film, partly based on the director’s own memories, and Hagard is particularly sensitive to details – as if taken straight from the past. The changing Jakarta is visible on a macro scale, in skyscrapers slowly obscuring the landscape, but also on a micro scale, in a family cell reacting to the progressing civilizational and social changes, and even at the level of an urban atom – e.g. products of famous brands. It is up to the viewer to decide what to focus his attention on.

The second example of using the VR environment to revive personal memories is Rain Fruits by Song Youngyoon and Lee Sngmoo from South Korea. It is a record of the experience of Thura, an immigrant engineer from Myanmar, who deals with the state which attracts with the promise of opportunities, but excludes and marginalizes because of one’s origin, only exacerbating social inequalities in the process.

Korean creators focus on the diary of Thura – VR enables a dynamic walk through the dreamlike, animated reality of memories. The shapes are not always clear, as observers the viewers more like drift in space than follow the trajectory of events.

The aim of the creators was to get the effect of enhancing the spoken word. A volumetric image can take on whatever shape viewers can imagine – but doesn’t turbo-capitalism look just as bleak everywhere?

Not only a sight – the journey through the senses

Cooper Yoo Sanghyun’s SIM: The Blind is one step further when it comes to playing with the senses. The idea of ​​the Korean visual artist was to visualize sound and build the clarity of the image on the audio layer, directed by the actors of the traditional Korean opera, Pansori. Here, in experiencing virtual reality, the viewers’ attention is shifted to those points from which the sound comes.

The very idea – using the VR environment as a space not as much visual as acoustic –  seems brilliant. Similarly, on the meta-level – an opera about the legendary figure of a blind hero by the means of this audio-narrative intended to reflect the experience of being blind. It cannot be denied, however, that Sanghyun’s work is perceived rather as a student game than as a film created by a mature artist – although it is an electrifying direction which shows the multitude of possibilities of VR.

The maturity of any medium can be seen from the fact that its creators are able to deconstruct its mechanisms and distance themselves from its flaws. Geimu by Dorian Goto Stone is a great example of such deconstruction. Using a story about a girl addicted to games, who enters the virtual world after hacking the system, the Japanese director points out VR’s weaknesses in a collision with video games.

Firstly, 360° of standard VR has been reduced to half, and the perspective is to imitate first-person action games. Secondly, the creator exposes the illusion of agency in VR – in Geimu the viewers cannot even move, and certainly cannot fight the opponents on the screen. They have no influence on the events – the interaction is therefore virtual.

John Hsu approaches the subject of interaction in the 2017 VR production Your Spiritual Temple Sucks differently. The creator multiplies the action in such a way that it is impossible to see everything at once – when the viewers look in one direction, something is always happening behind their backs. They can look where the narrator suggests, or in a completely different direction.

The VR environment still remains a difficult medium that requires time and creativity to develop tools that would make it a separate, original art, not associated with film or video games. Asian artists show, however, that albeit it is a tool that can be easily classified as being somewhere in the middle, it can serve both to enrich the filming experience as well as correspond with video games. VR doesn’t have to be just an imitation.

[1] Reaching more and more users – which is especially noticeable in times of the pandemic: in 2020, the VR industry began to experience a significant increase in interest.

[2] I am using the term “interactive cinema” in relation to VR not because I believe that these phenomena are completely identical, but because I think they have the same desire to cross the fourth wall, to absorb the viewer into the screen, to sink him into the film. the experience of being “there” in the film world.