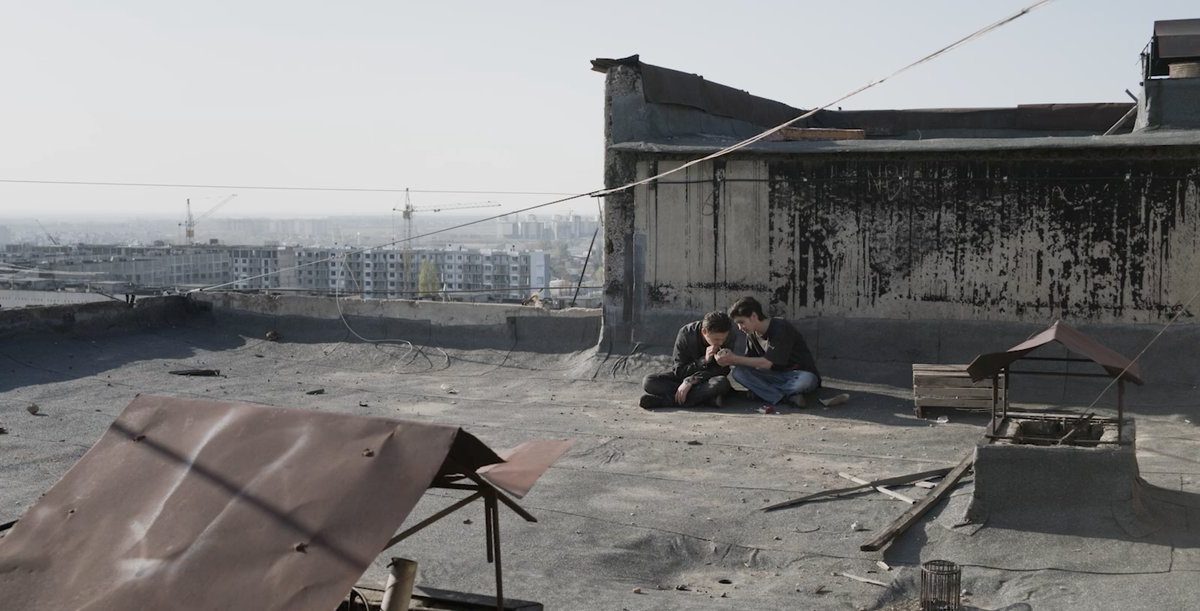 Farkhat Sharipov set his 18 kilohertz in the realities of residential blocks of flats of the 1990s. The urban jungle of Almaty will be no stranger to all those who grew up at that time in any Eastern bloc country. The coming-of-age of the Kazakh director is therefore a laurel of the times of wild capitalism, the reign of local dealers and the ubiquitous dreams of a better world and freedom. The film is an adaptation of Hardcore, a novel by Zara Yesenaman, which holds the film very firmly in the literary notions of such a well-known narrative about a boy who needs to mature to face the consequences of his actions.

When a school teacher asks one of the two young main characters of the film, Jaga (Alibek Adiken) “What are your values?”, the boy replies “Freedom”. This dialogue can be used to sum up the entire film by Sharipov – an image of an ever-tempting dream about the West, as well as a reminder of what a huge moral price had to be paid for the transformation. So Sanjar (Musakhan Zhumakhanov) and Jaga are a duo of teenage heroes who confront their notions of quick money with the dangers and consequences that lurk around the corner – friends find 25 grams of drugs that they intend to sell to local dealers. As you might expect, the task will turn out not to be easy, and the traps and temptations of the criminal underworld will be difficult to avoid.

18 kilohertz is a sound frequency that is said to be inaudible to adults. Adults who speak a completely different language in Sharipov’s film, incomprehensible to young people. It’s hard to say who is deaf to the brutal reality – passive adults or naive young people hungry for consumption. Yes, the film by the Kazakh director is build on simple contrasts, on prescriptions taken straight from school information leaflets, warning students against the dangers of the wider world.

It cannot be denied that the artist himself speaks with a mature – though perhaps not fully creatively matured – voice. So mature that, although he tries to convey the uncertainty of the time in a charismatic way – e.g. by musically quoting Dany Boyle’s Trainspotting, trying to root his work in classic portraits of the 90s – he inevitably falls into the trap of clichés and ordinary, bland boredom.18 kilohertz for Kazakh audiences is certainly an exceptional film and the reminiscence of the crisis of the transformation times is a parable of the conditions that prevail in the Almaty neighborhoods until today. This, at least for the neutral viewer, remains