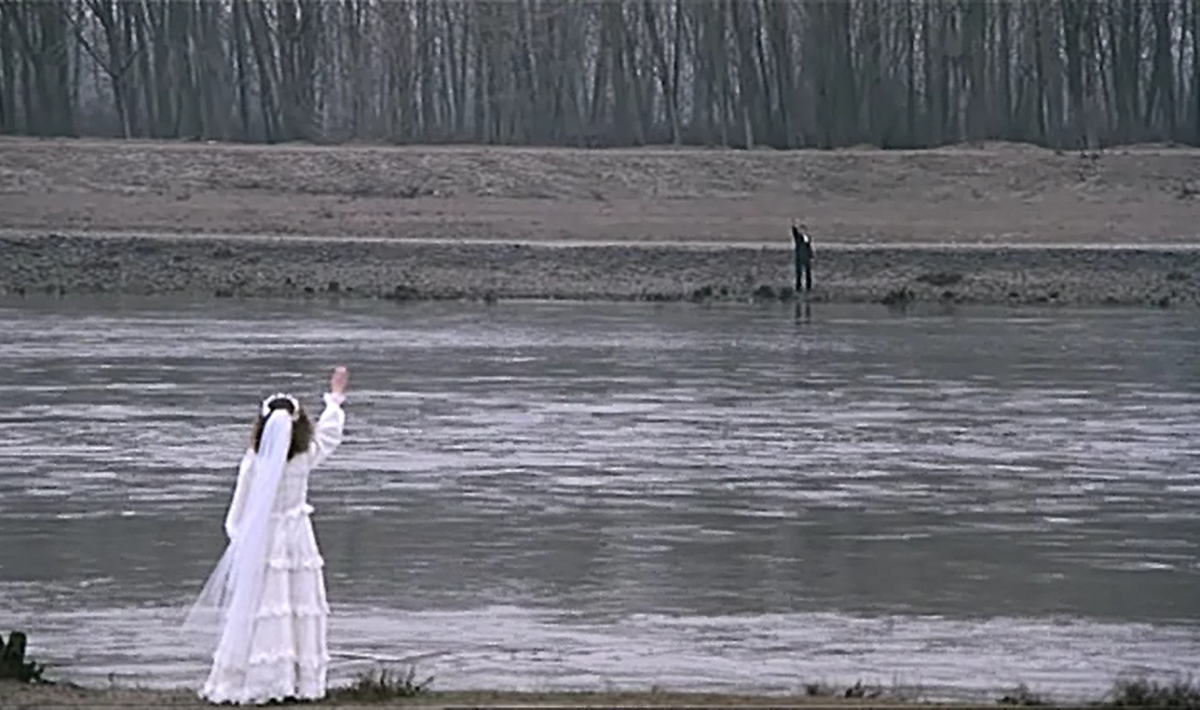 So many wonders are hidden beyond the fogs!

One can’t step close, cannot see them, nor take.

Some tried already twice, but God likes a Trinity.

All right, he’ll have to play one more time.

The gentle blue sky meets with the gray of the sea humming with sadness on the horizon, and the cool, morning city, covered with concrete like icing on the cake, mixed with rain, dirt and mud. The landscape is in the mist – as if it were an additional screen, surface, portal to another, poetic world. A world where half-forgotten myths talk with melancholy, longing and the absence, in which the echoes of the old days are finding a new home in the bitterness of suspended life. In a step that hung motionless just on the border of time and space.

Such was the cinema of Theodoros Angelopoulos. Deeply humane, reaching down to the roots of the soul, touching sensitive, vibrating hearts, the most intimate emotions. In the Trilogy of Silence (Voyage to Cythera, The Beekeeper, Landscape in the Mist) he portrayed  lonely heroes – characteristic for the neomodernist trend in cinema – silent introverts excluded to the peripheries, such as an older couple who, in search of old love, sets off on a small raft to the island of Aphrodite’s birth, Cythera. The raft slowly disappears on the horizon, dissolving in milky white fog – like a sea foam – leaving the impression of saying goodbye to the loved ones. Impression of the emptiness. The same emptiness experienced by the beekeeper Spyros, who, after an act of despair, lying on a bare, hard ground, taps a message using the Morse code. Being devoid of closeness and unable to communicate in any way with other people, only with the help of a code inaudible to anyone but the earth itself, he initiates a dialogue: with himself, with the viewer, and maybe with slow cinema space fraught with contemplative emotions.

In a sense, the whole Trilogy of Borders (The Suspended Step of the Stork, Ulysses’ Gaze, Eternity and a Day) tells about the problem of the lack of bond and alienation, which – although created in the 90s – seems to be extremely relevant today. The background of these films are border places. Restrictions and limitations that drive us insane. There is a particular scene in The Suspended Step of The Stork. Here, the bride and groom are standing on two banks of the river, which is crossing the landscape and being an obstacle to their fulfillment. They stretch out their hands in a gesture of faithful greeting, and their touch is so close and yet so far away. The border separating the lovers is like a punishment imposed on Tantalum by the gods – they cannot fulfill their desire.

The author of the only monograph (The Poetry of an Image. Theo Angelopoulos’ Movies[1]) of the Greek director in Poland, Rafał Syska, calls Angelopoulos one of the depositors of neomodernism. Theo was one of those artists who at the time of deconstituting reality and playing with postmodern conventions, modeled on modernists and believed in the power and sense of author’s narrative. Artists such as Angelopoulos, Wim Wenders or Chantal Akerman have preserved the spirit of modernism, let it mature and prepared it for entering a new, cinematic, artistic era – the time of contemplative cinema, slow cinema.

This slowness of emotion-filled reflection is not about the length of the projection or its pace, but about a specific rhythm opposing the attractions of mainstream narrative, which is tempting viewers with subsequent, universalized genre entertainments. Angelopoulos’ cinema has become one of the signposts for the cinema of contemplation, freeing the narrative from the convention, extending the hero’s journey in time and giving it the rhythm of a calm, sleepy heart, dreaming of emotions from another world.

After almost a decade from the tragic death of Angelopoulos, who did not manage to finish his last work, we slowly realize how much we miss him. How valuable is the time spent dealing with almost still art – mesmerizing and resisting the pace of modern life, which can slow down only in the face of a catastrophe, bringing to realisation the inevitability of the end. We can only slow down in the cinema, in sleep and in the mist.