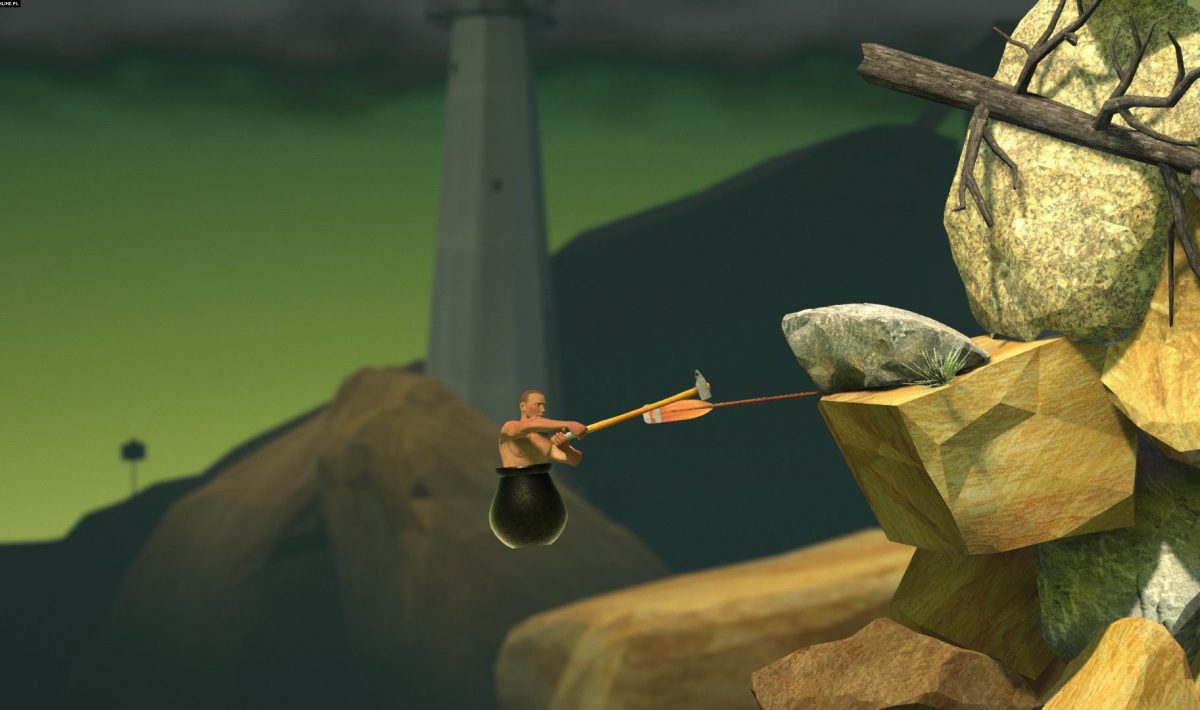 Getting Over It With Bennett Foddy is an unique, critical commentary on contemporary digital culture. The gameplay itself is a real, insanely difficult nightmare of keeping attention and not succumbing to the growing frustration caused by constant failures – climbing and climbing through the same route, falling and repeating everything from the beginning until it succeeds.

The world represented in the game is a cultural pulp. First of all, Getting Over It is, perhaps, one could say, a remake of another game, Sexy Hiking, as Foddy mentions. Secondly, the mountain we climb is composed, as the artist himself claims, of “garbage”, of random elements such as furniture, hanging houses, various accessories. Thirdly, the character we control, packed into a huge cauldron and holding a climbing hammer, is called Diogenes (the choice of the most famous representative of the Cynic philosophy, in which the perfect state would be total indifference, i.e. the inverse of mindfulness and it is not accidental).

The commentary read by the creator is also a pulp filled with autothematic threads – a story about the frustration of passing the game, deconstructing it – as well as quotes from philosophy, literature, poetry and popular culture. The range is really wide: from Ice T, through Shakespeare, to Nietsche (the satisfaction of recognizing the authors of quotes slightly sweetens the taste of a failure).

According to Foddy, and this is really interesting, in Getting Over It modern digital culture (and its impact on visual culture) consists of waste, processing and repetition, covering everything that is fresh with its overwhelming amount, with its speed of creation and the speed of reaction, as well as the attractiveness of handling everything that is familiar. It is a huge mountain of unsorted information, which is in perpetual motion – some of this information will be forgotten, other will be unearthed and processed, captivating us once again with the illusion of freshness. In this world, things are new only “for about 6 seconds, until the browser is refreshed.”

Foddy strips the way that digital culture works, depriving it of visual stimuli – in the end we can spend hours trying to climb this mountain, which repeats the same route. That is what makes Getting Over It extremely difficult (how much patience and agility you need!) and extremely annoying (for  a mind eternally connected to web), but also an extremely brilliant game. It is playing with the player’s attention – accustomed to the increasing number of stimuli, to action, to movement.

Jonathan Crary understood attention in three ways, all related to movement: “as a reflex process”, i.e. “mechanical adaptation of an organism to stimuli in an environment”, as “automatic or unconscious processes or forces”, or “as a decisive, voluntary activity of the subject”[1]. Contemporary mindfulness, as a principle of perception, combines these three understandings. More and more external stimuli appear, and the human mind must process more and more information – so it is constantly adapting to new “environments”. There are so many that it is impossible to assimilate everything, so the attention is shifted from one point to another – sometimes consciously, sometimes not.

Getting Over It makes us realize how hard it is to focus on one activity, on one element. How much our perception has become a battlefield between various algorithms focused on getting attention, the most valuable virtual currency. The hidden ending of the game, available to those persistent enough who decided to fight with themselves and went through the game to the end, leaves the player with a positive feeling. Perhaps the virtual world and digital culture are able to lay the foundations for a new platform of opposition, for the consolidation of a new community, capable of putting down not only algorithms but also a capitalist system in which they have deeply rooted.