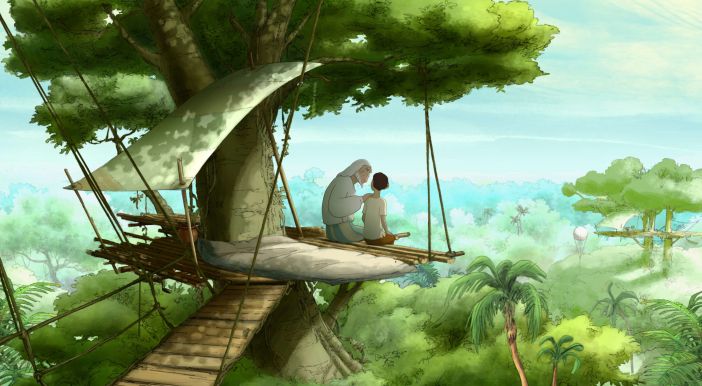 Like Louise by the Shore (2016), the new work of the French animator, Jean-François Laguionie (this time cooperating with Xavier Picard), La Voyage du Prince, is an extremely reflective film. Again the main character is an older person – or rather a monkey – and again the picture largely consists of comments, observations and memories. The difference is in changing the subject. Memory is no longer a purely sentimental tool, but it is supposed to strengthen the contrast resulting from the collision of two worlds.

The old monkey king, a traveler not devoid of fantasy, courage and curiosity, is thrown ashore a new, mysterious country. Confusingly, this place resembles nineteenth-century Europe (with the difference that its inhabitants are our brothers, primates), infatuated with the accelerating (thanks to the dynamically developing industry) wild, exploiting capitalism. Here life is embedded within the strict discipline of money, work and amusement – all in steel embrace of capital.

The prince himself says he comes from the “world of philosophers” who “do nothing but know the answers to all questions.” Thus Laguionie cleverly bypasses feudalism, embedding its monkey prince into the democratic tradition of the Hellenic world. Anyway, the hero has something of Archimedes – he is an inventor, he can build vehicles and machines. Curiosity is the main imperative of his actions.

The whole journey of the hero – who is imprisoned in the museum, and his counterpart, the professor, tries to prove the existence of other, intelligent civilizations in the world – is designed to present two issues. The first is the ironic commentary on capitalism. The young guide of the prince, Tom (their relationship works like a master-student, and sometimes they exchange roles), draws attention to the disadvantages of this social model, and the prince laughs them of. The second is to draw attention to how the capitalism treats the other (i.e. a statement on refugees). The prince, speaking a different language, from the very beginning is treated more like an animal (and later a threat) than like a thinking monkey.

In the background, La Voyage du prince will also stubbornly return to the ecological thread – a forest that wants to regain space lost to the city, the type of meals consumed, types of transport, etc. The end of the film will further emphasize this thread, showing the prince a different social model – living in a symbiotic harmony with nature.

The problem with Laguionie’s animation is that it draws solutions too easily. As if the world were divided only into good and bad, gentle and aggressive, progressive and conservative. As if breaking away from capitalism is only a matter of a simple decision. As if escaping from this system is a choice that each of us can make. As if outside, behind the woods, behind the mountains, there was a better and wiser world. In their fun with memories and imagination, the creators forget that we can change our world only from the inside – moreover, it may be too late for that – because there are no places left in the world that capitalism does not reach with its claws.