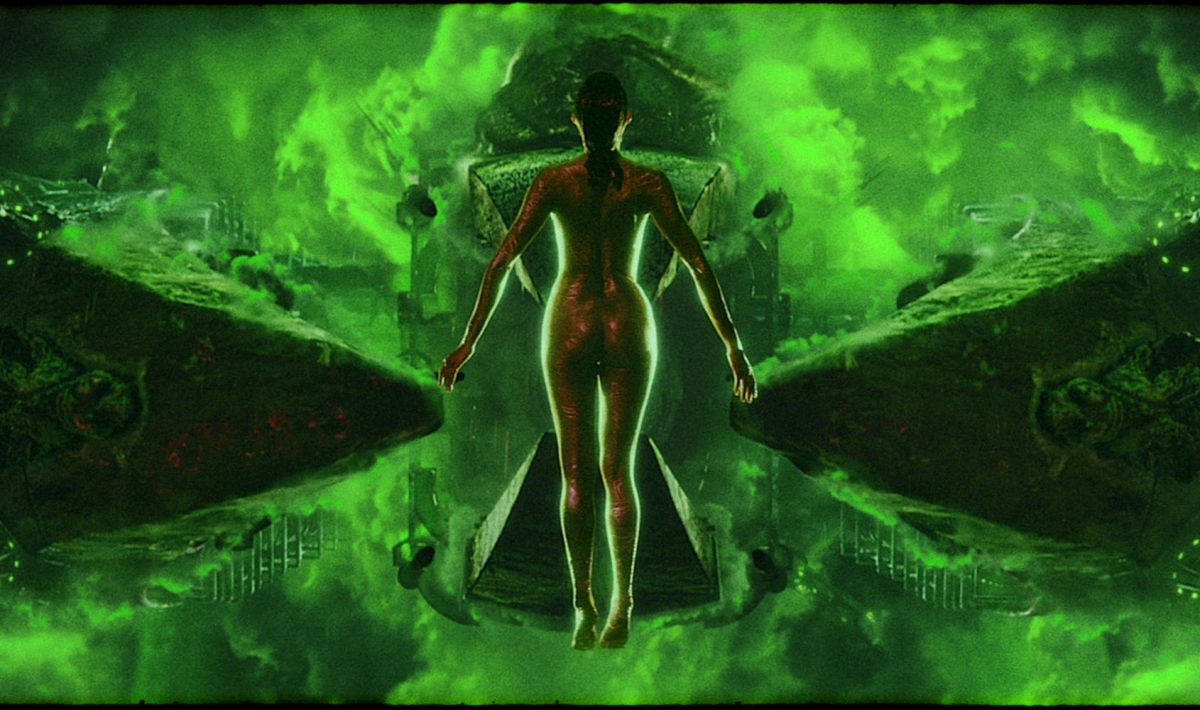 Blood Machines by the duo Raphaël Hernandez and Savitri Joly-Gonfard is a film that surprises on many levels. Something that at first seems nothing more than a festival of pure kitsch – the combination of Galaxina (William Sachs, 1980) with the pastel design of space ships straight from the never created Jodorowsky’s Dune – turns out to be something completely different. Suffice to say that if Galaxina were a feminist, she would fit like a glove in the world of Blood Machines.

The film made by French artists can be read as revenge on retro sci-fi (e.g. on Galaxina or Barbarella by Roger Vadim from 1968), in which a half-naked woman wearing a futuristic bikini was the object of a man’s wet dreams[1]. I consciously allow myself to magnify the situation here. The work of French artists is more a critique of the idea of ​​a colorful cosmos submissive to male domination and a strong opposition to violence against women, rather than the deconstruction of specific films – which, however, undoubtedly inspired the artists.

The dynamics of the work resemble a music video or a graphic novel. In just a 50-minute film, the creators managed to fit a compact, understandable story. The bright, technicolor styled and overdrawn visual effects are dripping with kitsch, but there is no shame in Blood Machines – the movie is exactly what it meant to be. This aesthetics – musical space opera with phenomenal synthwave rhythms composed by Carpenter Brut – can be totally bought.

Hernandez and Joly-Gonfard explore a topic known since the film-pillar of the genre, Kubrick’s Space Odyssey from 1968. Namely, the topic of robot ontology – is artificial intelligence aware of itself, do artificial intelligence has a soul, etc. French artists create a simple division using this ontological doubt. Men, representing the controlling power, see in robots only a tool, while women treat robots as sisters (AI is simply feminine – also visually). The fight for the liberation of artificial intelligence becomes a battle of the sexes – a gender war.

But even hard-minded conservatives should not feel offended, because there is so much entertainment in Blood Machines that it is enough for everyone. Also, not all men were portrayed negatively in the movie (and those who will decide to watch this film for a nakedness will get a solid dose of it). Let’s consider for a moment the figure of a senior mechanic who cares about machines and seems to understand the bond that connects women to their ships. The film by the French duo is a clever, educational, ideological job. Violent behavior is sharply (and effectively) stigmatized, and there is no doubt as to which side of the conflict causes sympathy.

Blood Machines is a screening that will provide a lot of satisfaction. First of all, it is a great entertainment, effectively satisfying the healthy need for kitsch, which each of viewers has from time to time. In addition to the fact of the film being a surprisingly successful production, viewers will feel the joy of triumphant justice overcoming violence, even if it is only for a moment.

[1] It is worth noting that Barbarella is not a heroine who was read clearly. For some, the hyper-sexuality presented in the film is a sufficient argument to mark it as offensive, others emphasize the heroine’s strength, independence and adaptability.