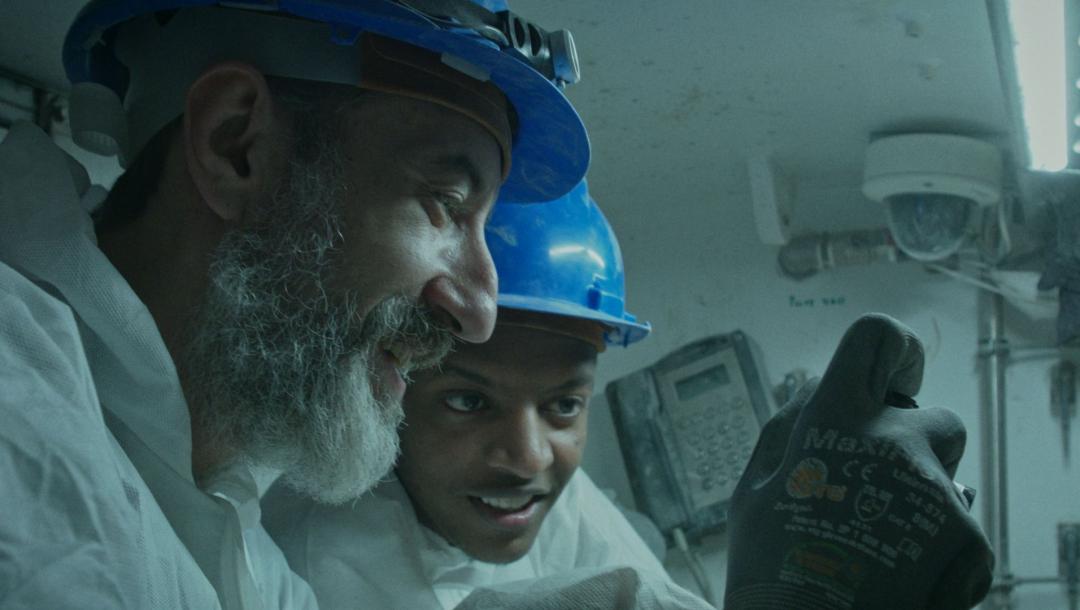 Construction of the Copenhagen subway, claustrophobic space of the pressure chamber at the cutterhead of the tunneling machine. Three people are trapped in a fire in this chamber (a white middle-aged worker, a black assistant who is a young refugee and a woman who conducts a sociological study on workers). The space itself sounds quite absurd, let alone the selection of characters. As you can guess, closing in a small chamber will cause tension between them. But before we get to this, a few words should be devoted to the construction of the place of action.

To realize how difficult it is to record solid material in a small space, it may be enough for one to imagine using a crowded elevator (or – remaining in the climate of the Cutterhead – in the subway bursting with people). There is not enough space to catch your breath, let alone fit your camera. The director (Rasmus Kloster Bro) in cooperation with the operator (Martin Munch) copes with this task excellently, being able to fit the characters in a narrow frame, while also reflecting a claustrophobic atmosphere.

In addition, the creators manage high credibility. The real danger is not the fire itself, but the growing panic, the difference in pressure inside and outside the chamber (the need for decompression and compression when moving from and into the chamber), the need to replenish fluids, running out of oxygen, as well as light, which may be missing at any time, which effectively binds heroes’ hands.

Everything looks and promises to be really good until the moment when the creators decide to abandon what they do well, i.e. credibly casted catastrophe of the tunnel construction space, for nonsensical, politicized trips towards the defense of the so-called white Europe. Like a jack-in-the-box, a conversation about the value of family pops up between the heroes, completely breaking the atmosphere of the film. And it’s okay, you can forgive something like this once, blaming the presence of this exchange of opinions for a not very successful attempt to deepen the psychology of characters. Unfortunately, this is not an isolated case.

The further into the forest, the more symbolism is clearly revealing director’s morally mistaken intentions. It soon becomes clear that each of the three main characters is an allegory. Ivo, a middle-aged worker, a father of two, represents old Europe based on the so-called “traditional” values ​​(a man struggles for existence, a woman takes care of children), and his approach is the most rational and he is the one who masters the viewer’s sympathy. Rie, a woman conducting the study, an independent, single mother, is to be a reflection of a new world that care for children, tradition and solidarity have for nothing (Rie is at the crash site, although at that time she should pick up her daughter from kindergarten, she is trying to abandon her companions), she also easily falls into hysteria. In turn, Bharan obviously captures the invaders from the East, who want to find a place in the rich West at all costs, regardless of the damage and human life (Bharan is indebted to his family, at some point he also tries to survive at Rie’s expense).

The decision to replace an effective catastrophic film with an anti-human, amoral lampoon for women and imigrants remains an unexplained mystery to me. The Cutterhead is a rare – at least at festivals – example of a film that combines good technique with an ideological bottom. Instead of leaving the viewer with goosebumps and in a sense of horror one will leave feeling a deep sorrow. Shame.