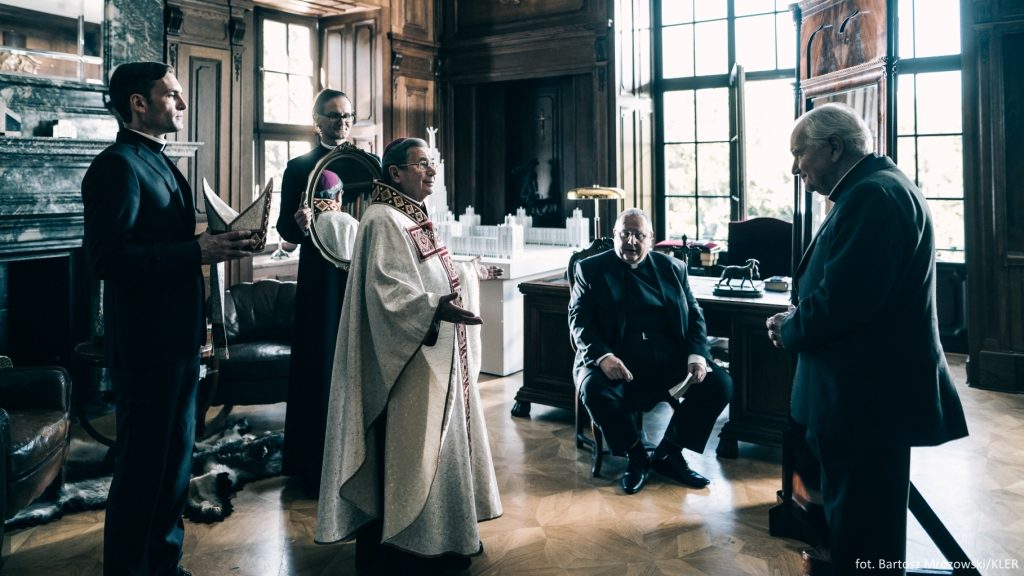 A good film criticizing the operations of any large public institution not only draws attention to the problem, but also seeks its source. What connects most of the socially-involved productions allegedly “attacking” the Catholic Church is showing corruption that has become the daily bread for this institution, something as natural as breathing. This corruption drills the institution from head to toe, from bottom to top, releasing its long, slimy, disgusting tentacles everywhere, hurting the naïve who still blindly believe in its good intentions.

In Calvary from 2014 (starring the fantastic Brendan Gleeson) we saw honesty, humility and goodness that cannot survive in a system consisting of weeds. Those who want to change something will sooner burn the entire garden than undertake the effort to extract valuable leftovers (doomed to total extinction). In Spotlight (there were of course more films based on this pattern, but this one echoed quite broadly) from 2015 we saw a mafia structure of hiding criminals and Church’s big classic – sweeping problems under the carpet by hierarchs. Finally, we also had the Young Pope from 2016, a series in which Paolo Sorrentino delicately and with aesthetic sensitivity and a sharp eye for the clergy borrowed from Fellini also shows the human, lost face of his characters (with an emphasis on the title one), torn by lack of faith in their words, themselves and the institution itself.

In a sense, Smarzowski combines all these threads. I waited a long time with the Clergy screening, afraid of Smarzol’s typical picturing of the worst elements of Polish identity: ecstatic, alcoholic outbursts of aggression, self-destruction and aversion to the characters he portrayed (and of course, these are accurate diagnoses, but how much can you play the Andrzej[1] of Polish cinema). Fortunately, as other reviews and the whole storm around the film have confirmed earlier, this is not the case. Finally, alcoholic explosions not only serve to surprise, to have us on the edge of our seats or to hold tension, but also are a part of the puzzle – a distorted, sick Polish Church. The heroes are well written. Despite what they do, they can be liked. Their behavior is the result of growing up in a harmful environment that turns victims into torturers, maintaining an endless loop of suffering.

Although Smarzowski claims to be an atheist, he did not create an atheistic movie. He created a film by means of which in some sense he wants to help the Church (despite the dangerous, offended stomping of the latter). He takes the side of those silent believers – not necessarily personally harmed, but those seeing the problem and perhaps boiling inside, attached to rituals by tradition or genuine believers, those who must withstand the vile eyes of an egoistic environment full of hate and listen to political lobbying. This is the movie for them.

Clergy is not deprived of hope for change. It tries to make the perpetrators feel guilty. The problem is that hierarchs, floating like donuts in fat of fortunes built on suffering, will not be convinced – they care too much about maintaining the status quo as long as possible. The convinced, in turn, need not be convinced, and the unconvinced, embittered and manipulated by the fear of hellfire will not reach the conclusion anyway. In this sense, Clergy contradicts itself. Let’s face it, hope for change is vain.

Smarzowski, quite unnecessarily, at some point reaches for the formula of personal confessions, creating simulacra of reality. Here, the actors play the role of victims, showing off the affective cries and emotions. A plot in which we have exactly the same thing (characters played by Jakubik and Braciak) would be sufficient. This recording of confessions seems quite low, unnecessary and – contrary to appearances – probably not very comfortable for real victims (as if the creator forgot that silence is often caused by very different factors, and confession is something extremely difficult).

Despite its flaws, Clergy can be pleasing. One would like to dream that it is another sign (e.g. after the recent scandal with the former priest-director of the Noble Gift) of an ill institution cracking – given the short human memory, the more such things, the better. So, after all: hope is there. Not for repair, but for the forthcoming fall.

[1] The name Andrzej (after the more pejorative name, Janusz, of course) in Polish pop culture has humorously-negative overtones.