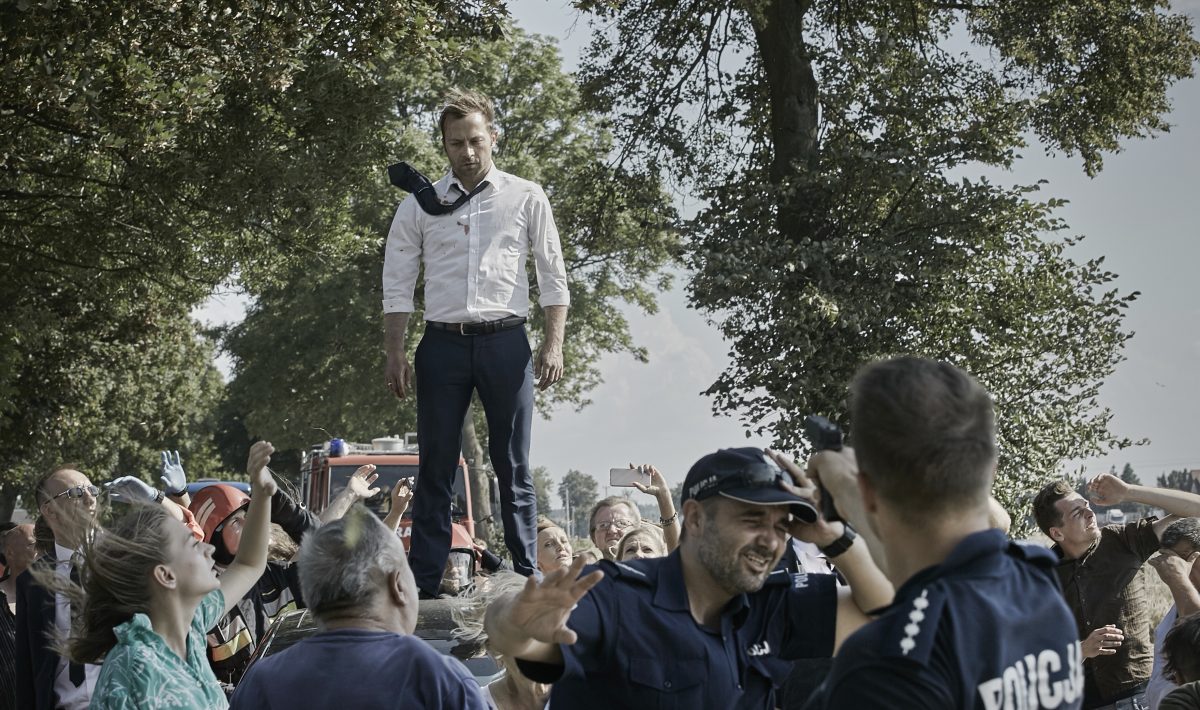 Bartosz Kruhilk, debuting as a director with his Supernova, seems to be well aware of the tensions that lie in Polish society. The young artist bravely scratches the wounds and sense of injustice and builds a simple but surprisingly effective thriller that has the viewers on the edge of their seats.

The director places the action of his film in the middle of the road that crosses the green fields, in a rural, open space, at noon on a summer day. Here is the simplest recipe that anyone who has watched Hitchcock movies knows. In order not to fall into the clichés known to everyone, one should reverse thinking. For the time of an accident that could have happened at night or in poor visibility on the road, Kruhlik chooses a sunny Sunday morning. The seemingly open and cheerful space will become an increasingly shrinking cage – according to the metaphor of the star’s explosion, energy accumulates in the place of the film’s action, which will lead to the dangerous eruption of emotions.

However, Supernova’s emotional effectiveness lies not only in breaking the clichés of the classic thriller, but also in deliberately reaching for subcutaneous tensions that hurt us all – for a sense of social injustice and for the immoral use of the law by the untouchable and privileged.

Here is the perpetrator of the tragic accident (I deliberately omit the details, because with such a condensed film it’s easy to spoil the viewer’s experience) is a politician. He discourages the viewer with his behavior, absolute disrespect for human life, arrogance and caring only for his own interest (sounds familiar, right?). He seems to be invulnerable and the police are helpless against his immunity, but the social pressure of the increasingly frustrated inhabitants of the surrounding village is more and more tightening around the politician’s neck. And the space – literally – seems to shrink. Everything points to lynching.

The string of emotions is stretched to a dangerous point – apart from a politician, there is a policeman for whom the accident turns out to be something more than just an exciting event on usually quiet rural roads and a family of victims of the accident, who will seek opportunities for revenge.

Everything would indicate that the narrative meticulously strives to implement the metaphor contained in the title – to a big bang. Unexpectedly, however, Kruhlik hits to the metaphysical tones. Where we would expect a spectacular climax, the director pauses and mutes the action. The effect is powerful – we are left alone with emotions that have not found and will not find an outlet anymore, as if some higher instance stopped time in a precise moment of inhaling air just before the scream.

I am not convinced by this trick – does it mean that only a higher instance can bring justice? Is there no outlet for us viewers and our accumulated frustration? Does the creator intentionally want to arouse anger in viewers? It’s hard to say – I think that Supernova’s main goal is not to seek answers to difficult questions, but to evoke strong emotions. And Kruhlik fulfills this task very well.

The debut of the young director – despite slight slips and sometimes narrating by the rule of thumb – is proof that it is possible to make a simple, solid genre cinema with modest budget in Poland. Among the endless historical productions and the next more or less successful romantic comedies – this is a needed breath of freshness and definitely the right direction for young Polish artists.