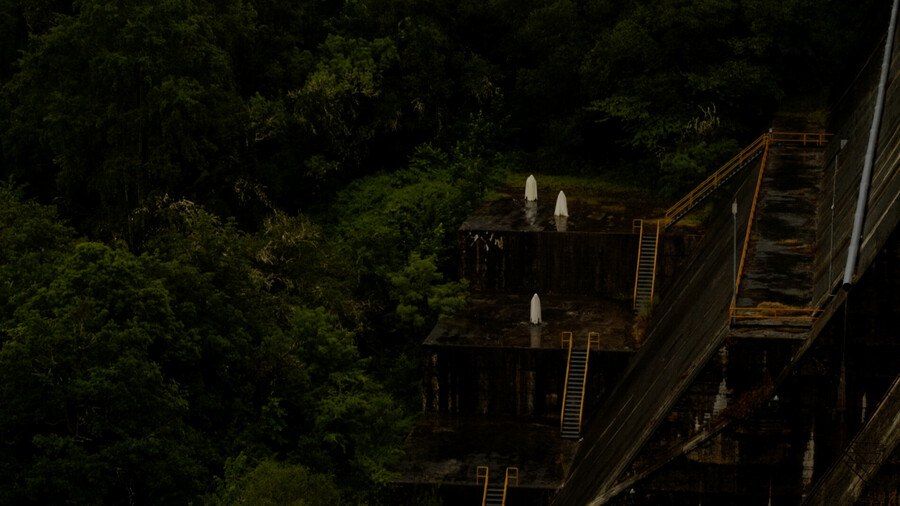 The silence is broken by the sound of the sea, a concert of a forest orchestra – singing birds, animals treading carefully on last year’s bedding, buzzing insects – and a whisper of the wind. Wind that gently moves the clothes of motionless figures, people frozen in time and space. Wind whose slight gusts seem to imitate the movement of the camera, directing the attention of viewers, recalling the memories of an old mourning, silent words of regret over the decaying old grave.

In Lois Patiño’s Red Moon Tide lies a threat – a terrifying force that stops time, which slowly consumes the meaning of life and compels it to stay in an endless stillness. Here is the eponymous red moon, shining ominously over the heads of the immobilized inhabitants of a coastal Galician village. Is it the one which takes control of tides of human lives?

Patiño’s film is a poetic dream, a memory of a lost world, a tender yet moving imagination and nightmare-causing fairy tale – a remnant of local legends and myths passed on orally from generation to generation. A sad story about the collapse of the human world, which, in opposition to the processes of nature, can only lose the fight against time.

Patiño is not only a gifted storyteller, but also a careful observer. Red Moon Tide is a picture of a dying world – dying for various reasons. Among the still faces, sometimes only revealing the smoldering life inside with a blink or shallow breath, we will not see youth. The Galician village has been struck by the curse of an old age – this sad life can only go on repeating the same grim tale over and over and patiently waiting for the monster to devour it completely.

By using a fairy-tale formula so deeply rooted in the Spanish tradition of magical realism, the Spanish director and visual artist tells the story of so many western villages and small towns, slowly devastating under the influence of the attraction of larger celestial bodies – great metropolises, pulsating folds of capitalism, devouring and sucking the youth.

This magical vision was framed by beautiful and thoughtful frames – Patiño himself stood behind the camera, taking care of visual coherence. The image alone is enough for the Red Moon Tide to shine in full brightness. And perhaps, paradoxically, the orality of this oral tale is something that does not allow the red monster to completely hypnotize the viewer. Although the Spanish artist’s film is a successful project, one would like to plunge and get lost somewhere in the red sea depths, following in the footsteps of Rubio, the sailor who is deciding the fate of the village – the voices of the dialoging characters brutally pull the viewer out of this water.