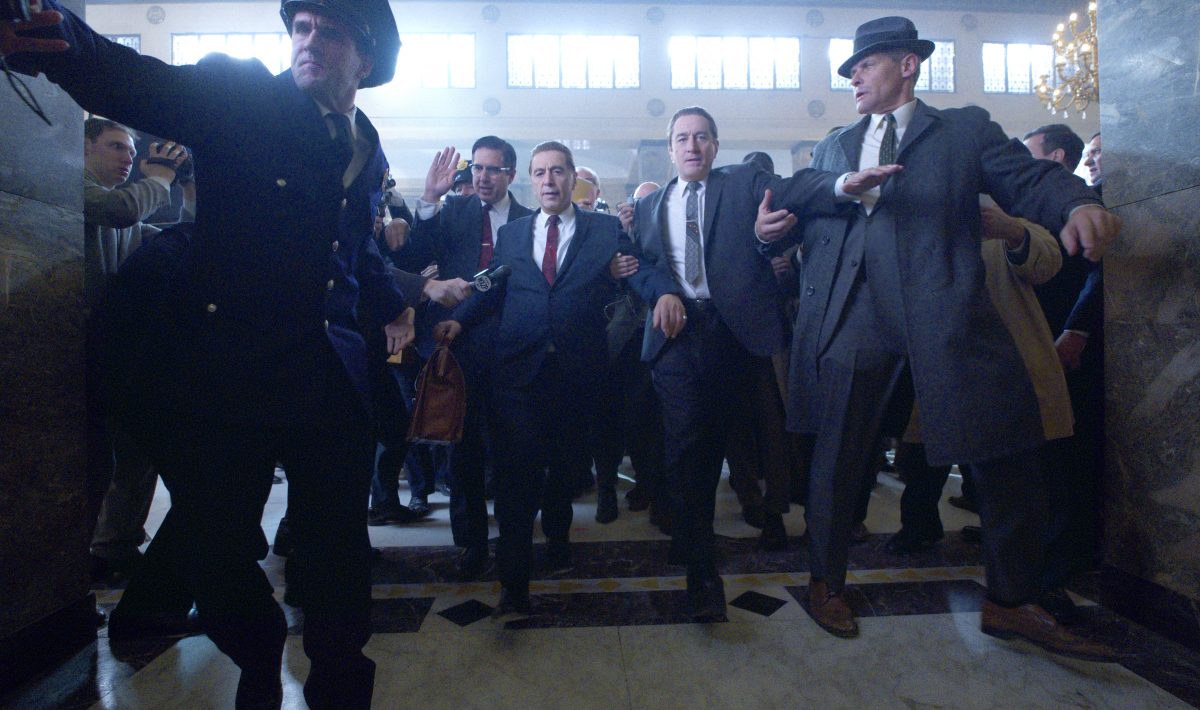 The Irishman, despite telling a story of a criminal environment, is not a gangster movie. If someone before the screening expects that it would be the 21st century’s Goodfellas – dynamic, effective action and tension balancing on the border between life and death – one probably won’t be satisfied. Martin Scorsese’s new movie is definitely closer to Silence[1] than to Goodfellas. The American director treats the biographical tale of Frank Sheeran’s criminal career as an excuse to focus on the subject of guilt and punishment, and the narrative, diligently spread over several decades, is a regretful reflection on the passing of time that will sooner or later settle everyone’s sins.

The latest work by the American director is monumental – as monumental as a picture of one long life packed into a three and a half hour movie can be (which from the perspective of the whole seems to be highly condensed). Therefore, it consists largely of a character-based exhibition of memories. From the 1950s (and memories of the 1940s, World War II), when Frank is a delivery truck driver and accidentally enters the underworld, through the 1960s, Kennedy’s presidential election and the hero’s developing career – more and more bloody and lush – until the 1970s (and later – Sheeran died at the beginning of the new millennium) and the culmination of his career and act (tension between friendship and execution of the death sentence), which will be the straw that broke Sheeran’s wavering morality’s back.

In a sense, The Irishman is arranged in a form of a story within a story. The main layer surrounding the entire rich, stretched for years, narrative is the image of an old, decrepit man abandoned by everyone (the personification of relatives and friends increasingly moving away from the criminal, will be Frank’s oldest daughter, Peggy, who will fall completely silent in the end of relationship with her father). A man who alone became the last medium of memory of events that have no meaning for everyone around him. In view of the environment’s indifference for the old man in the wheelchair, the more sad are these memories and an attempt to settle accounts with the past.

The Irishman was packed with details from Sheeran’s life, dialogues, gestures, all this entirely devoted to the powerful force of sentiment. This sentiment results not only from the autobiographical material – a book written by the famous criminal – but also from the memories of the director and outstanding actors of their generation, clearly associated with gangster cinema, genre icons: Robert De Niro, Al Pacino and Joe Pesci (appearing on the screen in such a company for the first and probably last time). Martin Scorsese’s film is also their personal reflection on the passing of time – after all, the whole team inevitably approaches the end of long and fruitful careers.

In the movie, the “de-aging” technology was used on actors for the first time (with such a momentum) in history of the cinema. This age manipulation is interesting not only because of the effects (better or worse, as it happens with the first, semi-experimental attempts), but also because it corresponds with the subject of the film. There is something disturbing about this rejuvenation, something like contact with a living mummy.

Actors reaching their eighties were subjected to the process of conservation and mummification. Pacino has been rejuvenated in all his scenes, Pesci in some, and De Niro has undergone all possible treatments – rejuvenation and aging (by computer, by traditional means – by makeup – and mixing both methods). But how does this technology actually work and what is so innovative about it?

Instead of “pure” computer effects, where often the unnatural and in reality impossible lip movement betrays CGI (like the resurrected Carrie Fisher in Star Wars: The Last Jedi), the “de-aged” image (built by using shots from older performances of the actor) is in a sense put on the present face of the actor.

The problem is that the effect looks like breathing life into a not very lively mummy, into a well-preserved corpse. However, there is something extremely interesting in this process, something almost elusive. Like our mind that, under the influence of time, plays tricks on us and distorts our memories. Like being in several times and spaces at the same time. Like rewinding VHS tape and stopping at selected moments.

I think one can risk saying that The Irishman – by using “de-aging” technology – outdoes the sentence once said by Susan Sontag: “Life is a movie; death is a photograph”. In a sense, Martin Scorsese’s film is a mix of both. It captures both what is permanent in memories (and the changing faces of the same people, in which there is always something that allows us to recognize them), as well as their dynamism and selectivity of human memory. If one would set the photograph in motion, it probably would look like this – with bodies that move, but are they really alive?

The Irishman is a deeply spiritual and personal film. It serves to satisfy the eternally hungry sentiment – which in this case serves more the artists than the viewers. Will it dissolve in memory, like the events of Frank Sheeran’s life, will it find a permanent place in the pantheon of the cinema? We will see. There is no doubt, however, that “de-aging” is a technology with a research potential – and further experiments with its participation are waiting to happen.

[1] Also in this respect that The Irishman, like Silence, was a film Scorsese had dreamed of producing for years.