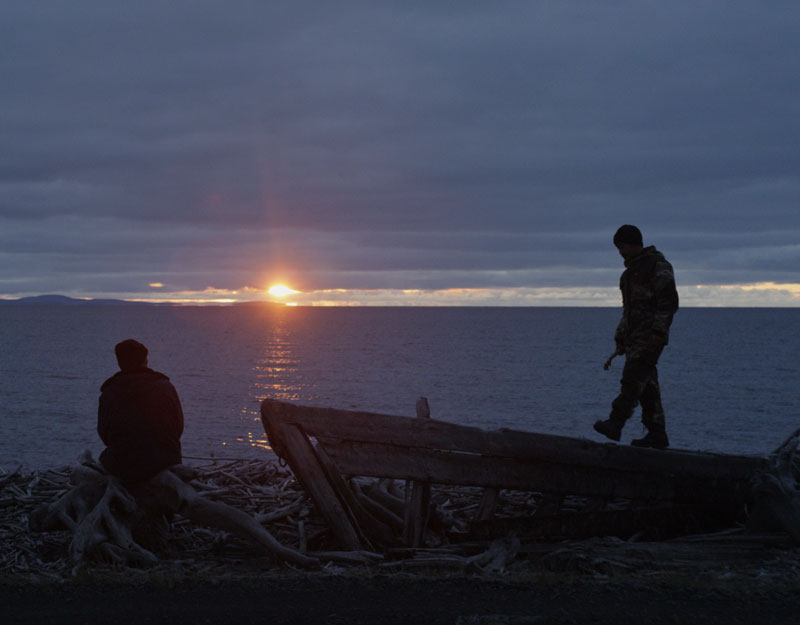 When one is choosing a screening of a Russian film one can expect many things that the cinema from across the eastern border has accustomed us to. One can expect a harsh drama that efficiently uses symbols (e.g. the cinema of Andrei Zvyagintsev), an intellectual level that scares even the most persistent critics (such as in the films of Alexander Sokurov) or defiant cinema that does not always agree with the authorities (e.g. Yuri Bykov).

The film by Lyubov Borisova is an absolute negation of all the examples I mentioned. The Sun Above Me Never Sets is a film which is much closer to young, independent American cinema from Sundance than to Russian filmmakers, even though it sounds like a Yakut travesty of the film How I Ended This Summer by Alexei Popogrebsky from 2010.

Here we have a young Altan who, apart from producing influencer videos, does not know what to do with his life, and – under the influence of his father, with whom he does not have good contacts – he goes to a remote island in the Arctic (more precisely in the Laptev Sea) to breed fur foxes. There, he meets an old inhabitant of the island, Bajbal (played by an amateur actor, Stepan Petrov, already known to a wider audience from Eduard Novikov’s The Lord Eagle from last year), and a friendly relationship is formed between them. As you might expect, under the influence of this contact, both men – one young and the other old – will repair each other’s lives.

The idea looks really good. Bajbal would soon like to join his wife who tragically died many years ago – so he is trying to persuade Altan to make this path easier. If by choosing the screening of The Sun Above Me Never Sets you dreamt of the Yakut version of the Iranian Taste of Cherry (Abbas Kiarostami, 1997), then you have to prepare that this dream will be cruelly destroyed.

On this all comparisons (exaggerated almost as much as Borisova’s film) end. The director from the very beginning of the film aims for a cheap, naive and sugary coaching-like tale of happiness and the meaning of life, which can be found in simple life, small pleasures (such as fish soup) and in the family.

This naive view of reality, in which friendship and good will can change the world and the hard-hearted heroes, cannot be denied a certain immature honesty. The creator gave her characters a lot of freedom and one should pay the attention to the naturalness with which both men appear on the screen.

Unfortunately, Lyubov Borisova could not resist interfering with the presented world. Instead of leaving the harsh, northern, Arctic island to its secluded and empty beauty, the creator turns up the color palette, enhancing every tear-squeezing scene with the warmth of the picture. There will be a lot of the eponymous sun setting, and the gentle guitar playing will quickly become unbearable – at least for some viewers.

The American character of the film is testified by its warm welcome in Toronto and Los Angeles. And I understand that as a family tear squeezer The Sun Above Me Never Sets is working well – it is as clichéd as possible and gives all the solutions on a golden tray. But just like in the case of the coaching approach to life – a positive attitude in the film of the Russian director is treating the viewers like not very clever children. The picture will leave a regret for shed tears and completely wasted potential of arctic space.